Bogdan! What a fine old Romanian name for a young man.

Where's the bar?
I walked into the newbie's tavern.
Looked around to find the bar?
I found this gold brick,
Someone said, "Its a bar!"
"How can you get a drink? Where's the barkeep?"
"What do you mean go to fort Knox."
"You say, that's where they keep the bar?"
"I don't want to keep the bar! I want a drink?
`No. I am not looking for a mink! A D space R space I Space N space K spade ! space."<
"Am looking for a drink, not a fink. But a drink. something you put in a glass or cup. That you drink out of."
Ỳes, I said, Indeed, I said Drink. No the king is not a fink.
What do you mean, t take me to the wall. Secure me in chains. For what did I do?
WHAT!

Rick! You can certainly park your walker here. Vernie will be along shortly to provide you with your custom engraved bedpan.

As for a drink, the bar has been somewhat poorly attended to lately (#%$&% regulations) but we do have a special drink here. You may like it. It's called a 2X4. If I remember correctly, it is 4 parts whiskey to 2 parts maple syrup. Best to drink it without removing your face mask.

Take a chance. Amaze yourself.

Location
In the carpenter's shop eating oysters with the wa

Or just walk the whiskey around a maple tree a coupla' times.

Michael Myers said:
Or just walk the whiskey around a maple tree a coupla' times.
Click to expand...

It is endearing to be here. What are you going to? Playinbg frizby with bedpans what if they are needed. There is a purpose for them isn't there.
The place is so peaceful, and serene. The way things are going let's relax and take some time to meditate on things of tomorrow. Beauty is the day
that is here. Dream little dreamer of things that must be dreamt. Leant from god's hand to us. His beauty is what we see. Beauty is.

It's Independence Day USA. To further international education, I gotta ask Andreea in Romania, Gail in South Africa, and Rick in Canada if you guys have a 4th of July where you live?

Well, I'm a stranger to this thread, but I'm Canadian and appreciate the joke.
And, you'll be interested to know that this year, in my neighbourhood, we apparently celebrated the Fourth of July as well.
On the First of July we were forbidden fireworks, because of crowds, no room in ER for blown-off fingers, etc. But, there was no embargo mentioned on fireworks in general. So, last night, just as the Macy's New York fireworks were going off, we hear, from the back roads, the sound of fireworks, live!
Not as big a show aspublic fireworks, but exciting all the same, especially as some of them came above the rooflines!
So, thank you, America!

frimble3 said:
So, thank you, America!
Click to expand...

Fireworks are also illegal in our town, but here as in Canada, plenty risk fires and fines to light up the neighborhood and fill it with the scent of sulfur and nitrates. I get a blesséd pass on the pop-pop-boom!

, but Kay says those went on far into the night and Sunday, too.

So on behalf of the US, you're welcome for Canadian lawbreakers setting off pyrotechnics most likely made in China.

PS: I'm thankful for the kindness of strangers, Frimble. I think the problem with most residents here at the infirmary is they fall asleep

Um... *cough*... July 4th fell on a Saturday, right? This means that, in my house, it was probably cancelled due to lack of interest. Saturdays are traditionally sleep late - walk around in pj's - avoid housework - take frequent naps - and mess around with whatever is the current craft project days. I may have forgotten about the interwebs. However, I will show up on Labor Day to remind Vernie to pack away her white shoes.

GailD said:
However, I will show up on Labor Day to remind Vernie to pack away her white shoes.
Click to expand...

Around here, rebels who refuse to wear masks are barred from Costco, Fred Meyer, and WinCo and escorted out if they de-mask before they can cough or sneeze on the fruit and veggies.

I wear my mask when out and about 'cause I'm afraid not to, but I'm gonna wear my white leather walking shoes with the old guy Velcro closers far past Labor Day.

In your face, fashion police!

Face masks are mandatory in SA. (Which makes total sense if you want to conquer this virus.) I have made myself a series of masks to match my outfits!! 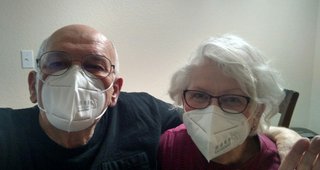 I s'pose no white masks after Labor Day, either? Gives us a couple months to sew, so . . .

I make mine out of colorful bandanas and shweshwe. That way, they're washable and reusable.

As I was tripping on the stairs
I saw my brain that wasn't there
I looked again alas I say
it wasn't there again today...

porlock said:
As I was tripping on the stairs
I saw my brain that wasn't there
I looked again alas I say
it wasn't there again today...
Click to expand...

You are the new Ogden Nash!!

And I can't think of a single, smart poetic line as a response.

It's one of those days.

You are the new Ogden Nash!!

When called by a panther,
Don't anther.

It's warning can be applied to other dangers:

When called by a calico

Billy, in one of his new sashes,
Fell into the fire and was burned to ashes.
Now, although the room grows chilly,
I haven't the heart to poke poor Billy.

“A man to fall into my life,” was her hope.
How awkward when his parachute failed to ope.

< Grabs Some Hazelnut Coffee and an Eggplant

GailD said:
Billy, in one of his new sashes,
Fell into the fire and was burned to ashes.
Now, although the room grows chilly,
I haven't the heart to poke poor Billy.

Poor Billy indeed; after all, he really didn't want to make an ash out of himself.

“A man to fall into my life,” was her hope.
How awkward when his parachute failed to ope.
Click to expand...

I'll raise you another:

A father heard his children scream,
So he threw them in the stream.
Saying, as he dropped the third,
Children should be seen and not heard.

Lavern08 said:
*Slips In and Slides the "New Guy's" Monogrammed Bed Pan Under the Door*

< Grabs Some Hazelnut Coffee and an Eggplant

*whispers*
Who's the new girl?


porlock said:
Poor Billy indeed; after all, he really didn't want to make an ash out of himself.

Ash and ye shall receive...

There was an old man from Darjeeling,
Who traveled from London to Ealing.
It said, on the door,
'Do not spit on the floor.'
So he carefully spat on the ceiling.