I need a comic to read.. which one?

aguywhotypes said:
I'll be honest. I'm not into supers, but I'm willing to give it a try.

What super do you recommend for a complete adult noob?

What about something other than supers? I don't know where to start. The whole thing is very overwhelming.
Click to expand...

You might enjoy Stan Lee's autobiography (written with the help of Peter David and illustrated by Colleen Doran), Amazing, Fantastic, Incredible: A Marvelous Memoir, which, despite its status as non-fiction, is written and produced in the style of a graphic novel.
Last edited: May 14, 2016

I'm going to throw in my endorsements for Saga, Sex Criminals, The Fade Out, Velvet (really, if it has Brubaker's name on it you should read it), Lazarus (also read Rucka's Stumptown and his Batman work is amazing!), and tossing in some Descender if you're into sci-fi to go with the Saga. If you want your sci-fi with some feminist politics, also pick up Bitch Planet. Even if you're not a big fan of fantasy, the comedy in Rat Queens might be enough to get you past the sword and sorcery. It's a riot and also really well done.

The Exterminators. Put out by Vertigo. Only went 30 issues but still one of my all-time faves. If you like twisty things, check it out.

I'm going to say anything that Brian K Vaughn writes, which would have Saga in it (but its kind of a space fantasy... story). Y:The Last Man is an all time favorite. All of the men on earth die, except one.

Preacher is also amazing, real world, but a preacher in Texas is given the Word Of God. So, that's fun. It's complete (so is Y, but Saga is on going).
Sweet Tooth is a great story. Post Apocalyptic.. with animal people (mutated, not anthropomorphic).
Descender is new (and on going) that is really good. Space story, about an android boy living in a world where androids are illegal.
Locke And Key (completed) is amazing. Real world, crazy stuff happening. I don't think its horror, but some might.
We3 is very short, but so so good.
Death Vigil is super great, funny, too.
While you don't like Fantasy, you might still dig Rat Queens. Super fun and funny.

Uhh.. yea. That's a good starter list I think, with a good variety. Check some out and let me know wha you think, I might be able to narrow down some recommendations based on that.

Sorry this was kind of long, I just love comics!

-Edit- I for got to mention, none of these are about supers. I don't typically read about supers either (except Xmen).
Last edited: May 14, 2016

I gotta recind my rec for Rat Queens - they recently brought Roc Upchurch back on, and I can't in good faith recommend "feminist" comic with a known and unrepentant/violent domestic abuser on art duties, especially when they displaced an excellent female artist to bring back a male abuser.

So if you don't want to give money to someone who beats his wife, maybe pass on Rat Queens.

The Maxx. He thinks he's a costumed super hero but he really isn't. It gets trippy and is my personal absolute favourite but it's likely an aquired taste. Deals with heavy subjects. Alternativly you can watch the 90's MTV cartoon on Amazon Prime.

Transmetropolitan. In the far future, Spider Jerusalem is a drug addicted, chain smoking nhilistic journalist with a heart of...eh...something. He's not all bad.. It's gross, gory, crass but there's real deep meaning and themes about what it is to be a human and good in a corrupt world.

The Darkwing Duck comics by BOOM! Studios. Especially the first 2 story arcs. They kind of lose their way after that.

Jem and the Holograms. Diverse, strong women, cool art, colourful and fun. It's the way a reboot SHOULD be done.

ETA: I forgot to mention Alex + Ada. In the future, robots are made for companionship. Alex's girlfriend recently left him so his aunt gets him Ada to ease the pain, but when Alex learns of a way to give her her own self-awareness, things get dangerous for them both. For mature readers as it contains sex and violence but it's a really great What makes us human? story. 15 issues long.
Last edited: May 18, 2016

Johnny The Homicidal Maniac is mind-hollowing. i love it every time i read it. pure gold.

If you're not into superheroes but are willing to try a book with superpowers, Valiant's Harbinger is ambitious and well-written and can be had in 2 deluxe editions digitally. The main character could turn you off in the early pages, but I find his actions there humanize him and immediately remove all danger of him being milquetoast, largely due to the nature of the act. A great cast of characters and it handles death better than 99% of superhero books. Although I still think there was one elephant in the room regarding the big series death that never is addressed. Think Alphas or Misfits or Heroes but way more visionary and sophisticated with some great set-pieces and a rather nuanced villain.

The best book along these lines though, is the deconstructionist love-letter that is Planetary by Warren Ellis. It is super-powered but not exactly super-heroic. it gives fresh eyes to pop-cultural myths and legends. It helps to be familiar with superhero comics, but it isn't required. Most people have absorbed enough to get the important things. It covers a lot more than just superhero comics, and is just...jaw-droppingly great.

Copperhead. A bit of a space western as so many always are, but great pacing and fun characters populate this book. 2 collections available right now.

Trees. Warren Ellis. Alien invasion but not like you've likely seen it before.

Ignition City. Warren Ellis. Again. You can't go wrong with this guy. Pulpy but bloody space opera. Like Flash Gordon with a bit of gore and a narrative bite.

Genius is about a girl from the hood that leads an uprising.

Scarlet is almost atavistic in its revolutionary anger.

Both Genius and Scarlet tackle similar and often uncomfortable subject matter, one via a guerilla war, the other a violent one-woman crusade.

For something just plain fun and well written there is always Mouse Guard. Shades of Redwall to be sure, but I think I like it better. Of course, it's been a while since I read Redwall so don't hold me to that.

Most of my other recommendations have been made so I wont' repeat them here.

Not Your Kind of People

I'm a Warren Ellis fan. I don't like everything he writes, but when I find something unique like his take on the execrable Moon Knight, and how he transformed a dull knock-off superhero into a must-read, that's his magic at work.

He didn't quite stick the landing on Karnak though. Ellis was sabotaged by the initial artist quitting/fired from the title and awful delays of over a YEAR on a limited series that only ran six issues. Karnak was a bit of a muddled affair from Ellis and even he sounded glad to finally cross the finish line.

One of Ellis’s notorious delayed projects is also finally wrapping up, Karnak, a six-issue mini series that launched in October 2015 and appeared intermittently after that.


KARNAK 6 is now wrapped – I proofed the colours and lettering on Tuesday night. Given its uniquely difficult run, I think Marvel will be happy to lay it to rest. I was only ever on it for six issues, but I somehow doubt anyone will be following me on that property for a while. Respect to my artists, Gerardo Zaffino and Roland Boschi, colourist Dan Brown, letterer Clayton Cowles, Darren Shan in the office and, particularly, editor Nick Lowe, for giving me the space to write this horrible little book. I suspect I have outstayed my welcome at Marvel with this thing that was really just bad readings of philosophy, punching, and a character study of an absolute trashfire of a human being. But I like to think it was worth it.

​
The collected edition comes out in March for all to enjoy.
Click to expand...

Next up, Ellis returns to DC to supervise and write a relaunch of the WildStorm Universe, but don't look for a rebirth of Planetary because Ellis considers that a closed chapter.

for someone new to superhero comics, and warry, I'd ask what they DO like in a story and match it that way. personally, I like stories with weird morality and a good amount of darkness in the characters. so I'm loving Secret Six. it's basically Suicide Squad but good haha. written by Gail Simone, focusing on a group of villains who sometimes do good things. sometimes. plenty of jokes, plenty of great characters.

if you prefer something with a lot of history, I'd say to read some of the big Marvel and DC characters who you've found interesting in movies. I loved the Tim Burton Batman movies, so I started reading him and now I'm hooked.

Or, if you want characters who are also new to the world of superheroes, Runaways is a good one. It's a group of kids who find out their parents are supervillains. really good coming of age story

aguywhotypes said:
I'll be honest. I'm not into supers, but I'm willing to give it a try.

What super do you recommend for a complete adult noob?

What about something other than supers? I don't know where to start. The whole thing is very overwhelming.
Click to expand...

I suggest read Monsters. It's not a superhero book; it's a dark mystery Manga comic book. 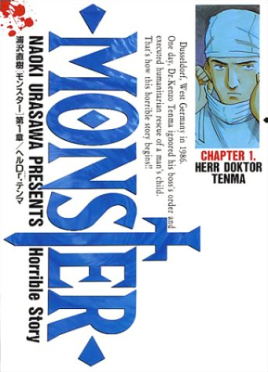 And thank you to whomever recommended the Maxx cartoon

Some of my favorite Indie comics.

The Massive: A Green Peace/Sea Shepherd like organization travels the world looking for their missing ship after a slow moving global disaster.

Wild Blue Yonder: The crew of an solar airship surviving after a nuclear exchange has to deal with a predatory gasoline-powered rival attempting to take home.

DMZ: So DMZ recently suffered a horribly unfaithful adaptation on HBO but the original comic books are really rather good. It's about a reporter searching New York during an America Civil War where NYC is declared a DMZ.

Saga: Tells the story of an inter-species family whose races are involved in a multi-planet war.

Rising Stars: In 1999 Babylon 5 Creator J. Michael Straczynski did a serialized superhero series that is rather unique.