Woollybear said:
I've loved your foxes and never expected to see one around here, though today saw a gray fox while hiking.

My two favorite foxes, Cher and Hemsworth, might be pairing up. They've been visiting the yard at the same time for the past couple of weeks, but now they seem to be foraging together, although they're not sharing food - yet. I got some nice footage of the two of them last night. Cher warns Hemsworth off a couple of times (she had a tasty bit and he was interested), but she didn't do it with a lot of vigor, and he behaved like a gentleman and backed off.

I'm usually of the opinion that the foxes aren't aware of the trail cams in the yard, but then I'll get a capture like this and wonder if I'm mistaken. This is Hemsworth, showing off his black-tipped left ear. I just adore him. He always has an air of calm assurance and his winter coat is absolutely gorgeous. 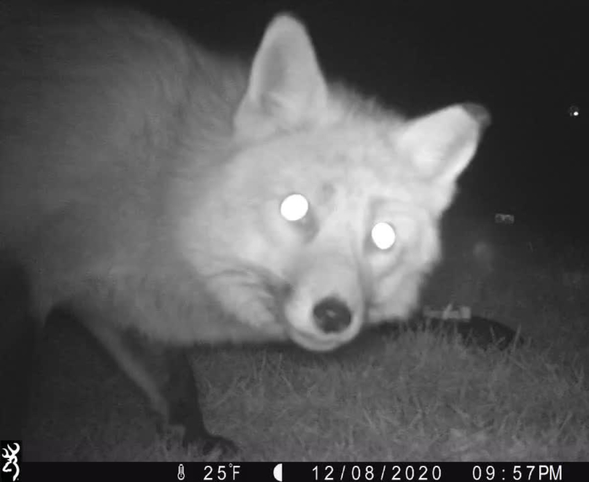 Over my protests, my husband put a mirror in the yard, just to see how the local critters would react to it.

I think that was a great idea, very interesting reactions.

I didn't understand what the deer was afraid of. Perhaps just seeing something brown and moving frightened it.

I think it probably registered the sudden, way-too-close movement of its reflection - something it wouldn't have seen until it was in close proximity to the mirror. It might also have caught a glimpse of its own eyes, which reflect white because of the infrared camera.

In any case, it was certainly spooked. The funny thing is, a couple of mornings back a young deer was in the yard and caught sight of itself in the mirror. It spent some time looking at its reflection, bobbing its head up and down as if trying to figure out why the deer was visible low but not high. (And it did check behind the mirror - all of the animals who've interacted with the mirror have had a look behind it.)

My "regular" foxes were wary of it at first, but now they ignore it. Hemsworth was the least concerned of all - he had a look at it the first night it was out, but he didn't get spun up about it at all. It takes a lot to distract Hemsworth from his chow.

There's been a changeover in personnel on the fox front: although Hemsworth still comes around on occasion, another dog fox seems to have claimed the territory. Dude was an occasional visitor over the summer/fall, but now he and his mate (I've christened her Maude) are the first to appear when the food goes out, and I suspect may be denning in my neighbor's yard. Dude is taller than Hemsworth; Maude is smaller than he and feisty. My trail cam footage shows me that they're in and out through the night, and often make a final visit just as the sun is coming up. My #2 cam caught Maude this morning:

It's not the greatest quality (it was still pretty dark out and I had to use a filter to make her more visible), but you can see her thick, club-shaped brush which is, so far, the only defining characteristic I've been able to spot. Dude's tail is thinner, with a bit of a white tip. I've uploaded a recent video on YouTube, in which Maude is giving Dude a major hard time for trying to horn in on the last few scraps of the evening.

Also, just for fun, here is Hemsworth getting a bad taste from the dish. I think he licked up some kosher salt that my husband insisted on adding to some of the fox snacks - and his reaction is...interesting. (I've told my husband NO MORE SALT.)

I think the ever so slight fuzziness in the image is wonderful. Maybe an accident but it gives the image an artistic quality.

Just when I was congratulating myself on the healthiness of my fox population, this hard-luck case showed up two nights ago:

The trail camera at the back of the yard caught him first, at a distance. I was overjoyed because due to the hairless tail and hunched posture, I thought I had an opossum visitor. The happiness turned to horror when he got in front of the close-up kitchen yard camera and I realized that it was a fox, absolutely eaten up with sarcoptic mange. On the video you can see his hind legs trembling, from weakness or cold or both. He gobbled up everything in sight, then came back later to check for more. The other foxes were alert to him but kept their distance, even though the other males in the yard have been fighting for territory lately.

I had a little cry over the footage, then got to work. The last time my husband and I made sausage, we ground up the trimmings, flavored them with peanut butter and formed them into little balls, which we give to the foxes for an occasional treat. I dosed a handful of the balls with Ivermectin, and left them in the dish last night, in hopes that poor Possum would be back. To my delight, he showed up as soon as the food went out, and ate every bite of the dosed food. The medication should kill the current crop of mites. In about three days, if he's still around, I'll dose him again. I'll dose every few days, to kill the mites emerging from the eggs the previous batch laid, and so break the pattern of infestation.

I can't do anything about Possum's fur loss but keep feeding him to build up his strength, and pray he has a warm place to den when it gets cold. I so hate seeing wild things suffer.
Last edited: Jan 25, 2021

Won't his hair grow back after the mites are killed?

MaeZe said:
Won't his hair grow back after the mites are killed?
Click to expand...

In theory, yes, but it takes a while. Wisp, my badly-infected fox from 2017-18, eventually grew back some of her fur and even whelped two kits that spring, but she never regained a full pelt and always looked patchy and down-at-heel. Possum looks awful, but at least he's got a good appetite and eats what's on offer. He's not shy of the food dish, either, which makes me wonder if he's been in the yard before.
You must log in or register to reply here.
Share:
Facebook Twitter Reddit Pinterest Tumblr WhatsApp Email Share Link