*dons sunglasses* Let's do this!

Congrats on quitting the day job. I'll have to go back in the thread to refresh my memory on your writing. I hope you have many sales and much success in adding new works to your portfolio.

Thank you, Norman! This certainly turned into an interesting time to be taking that plunge. But it is what it is.

My big news now is the anthology I'll be overseeing: niche science fiction where the humans are the weird aliens of the galaxy. A very fun topic, with plenty of great ideas already floating around the internet. One anthology already exists (I have a copy; it's fantastic), and I've spoken to the editor of that one to make sure I'm not stepping on anyone's toes by starting up another. All good! There is more than enough material out there to make multiple volumes.

Anyone can submit a story; submissions will be open during May and June. Details are here.

And for those who want to be involved, and pitch in to help fund this cazy thing, there’s an insider’s club on Patreon, with everything from writing prompts and mini-contests to exclusive art and free merch.

It's gonna be great. Feel free to spread the word!

As a tie-in to the things I write (and the theme of that anthology), I now have the first of several designs up for T-shirts etc: 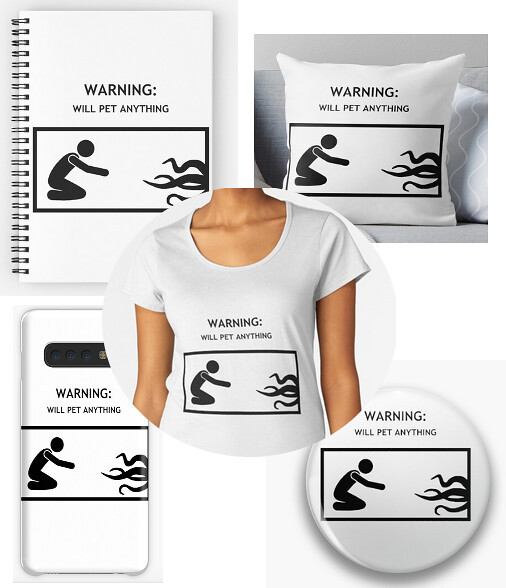 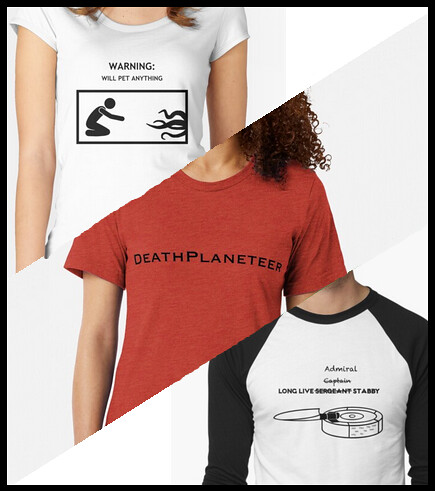 These are the three designs that I'm starting with; I have plenty more ideas to use if there's enough interest. (Aside from myself. I'm ordering one of each in some form or another.)

The submission period for the "humans are weird" anthology opens today! The email address has been up since midnight, and I've already got a handful of entries. Here's hoping enough will follow to make a most excellent book.

(Do you enjoy writing about humans weirding out their alien acquaintances? Details are here!)

Location
North of the Alps, south of the North Pole

MarlynnOfMany said:
As a tie-in to the things I write (and the theme of that anthology), I now have the first of several designs up for T-shirts etc:

'Will pet anything' - Fantastic!

I love your energy and spirit. Congratulations on quitting your day job!

Thanks for posting this thread, it's very inspirational!

Thank you, Raul! I try to be the kind of upbeat presence online that I enjoy seeing myself.

And on that note, good news! The Humans Are Weird anthology has had a renewed wave of interest, and the deadline is now extended to July 15th.

If you know any sci-fi writers who are fond of humans being the strangest things in space, do let them know! Details are here.

My own anthology is still in the works (I should see a proof pdf soon), and in the meantime I've gotten two short stories published in other anthologies. Yay!

There’s a story about reincarnation in this one:

And a story about a goblin saving the day in this one:

I love both of them for different reasons.

It's always very validating to get a trade publication. : )

Your enthusiasm radiates from this thread. Good for you!

Thanks, you guys! More good news: the anthology is up for pre-order! (Ebooks are live now, with paperbacks to follow.)

And I've learned that the more people who look at a pre-order page, the more copies Amazon will stock, thus making it look better to buyers, who will be more likely to get it. So by all means, do have a look! 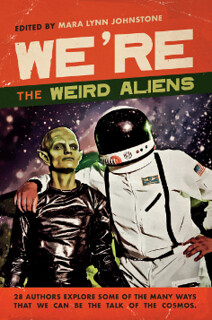 PS: Absolutely hilarious that I had to click an "I am a human" captcha to post this.

Not from Amazon, but directly from the publisher.

(Confusing, yes, but no more worries about the holiday gift timeline!)

Amazon and the other major retailers will stick to the schedule of having everything available on December 18th. (Unless they don’t, of course. The way this year is going, I’m not betting money on anything.)

Thanks! I'm happy with how it turned out.

And now the ebooks are up, which makes for more good options. Paperbacks are on track to follow from all the big online bookstores, to go with the ones available directly from the publisher now (which only ships to the US).

At long last, We’re the Weird Aliens is now available across the board. Amazon and the other bookstores carry it in paperback as well as ebook, and so do the brick-and-mortar local stores that have survived this absurd year. (If they don’t have it in stock, they can order it easily.) The direct purchase route is still open as well.

Very exciting! People are already saying good things about it!

Soon, on to the next project!

Some months ago a conversation with other writers turned from “this would be fun” to “we should actually do this,” and now the anthology is happening. Familiar fairytales from unfamiliar points of view, written in pairs so two different characters get to experience the same story.

What was my contribution, you ask? Do you know the fable of the Golden Goose? Are you familiar with the video game Untitled Goose Game, about the most glorious bastard that waterfowl has ever produced? My writing partner and I wrote two perspectives on the first, and mine has distinct influences from the second. It was FUN.

And now the book is up for pre-orders! Full orders start in *checks watch* a week and two days. July 1st. So if you want some fairytales and feathery shenanigans, here you go!
Reactions: PJanes

There's a minor typo in the title! Less yay!

But I've messaged Amazon about it, and they should fix it soonish.

I’ve been writing serial novels for Patreon: the second one has just drawn to a close, and now it’s time to start the third.

The first was science fiction, titled The First Time Traveler to Survive (in which no one takes into account the way the Earth moves over time, until the main character time travels and ends up on a space ship).

The second was fantasy, titled Accidentally Human (in which several fantasy creatures get turned human against their will, and have to go “off to beat the wizard” to get changed back).

This new one is Pests in an Alien Garden, with the human characters being the titular pests. They’re abducted and released in rival alien territory as an invasive species. While many writers would take this in a warlike direction, I’m leaning towards petty suburban drama in space. The humans are going to cause a lot of mischief on someone’s prize garden moon. It’s going to be great.

I wrote a story about the monster under the bed falling in love with the monster in the closet, and it's getting published in this book! Judging by the description, it sounds like the story is in good company. 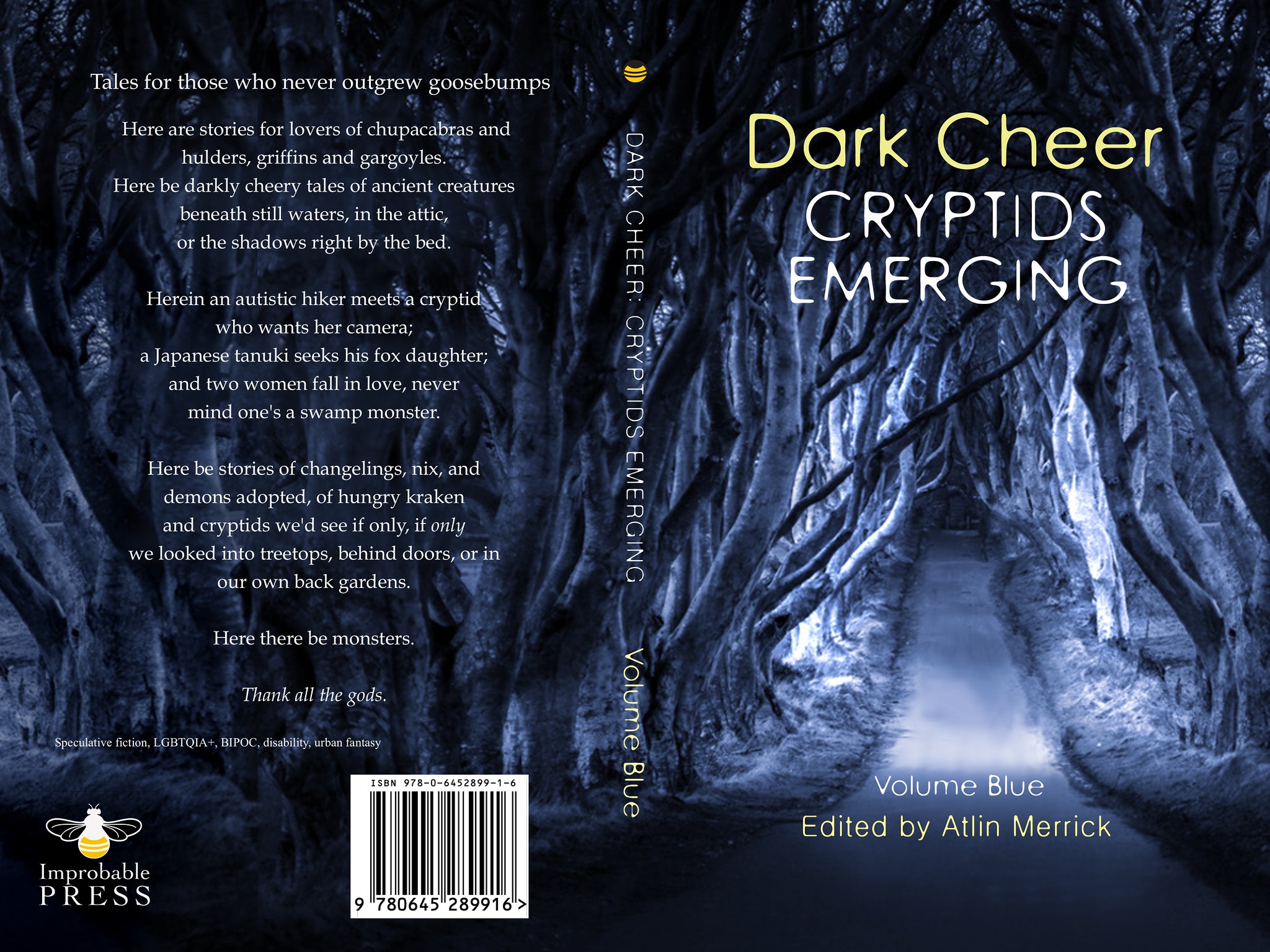