I hate to think of the death toll.

But all the photos and graphs and animations are impressive.

A lot of what looks to be very poor people have lost their homes.

We have tsunami warnings all over Japan right now.
Reactions: SWest

No deaths reported yet for the main island, but communications are very limited, especially in the outer islands. "Go to higher ground" is kinda hard when there is no higher ground.

NZ is prepared to deploy aid, with our Defence Force on standby, "but no direct contact has been established with the Tonga government as yet."
Reactions: SWest, Siri Kirpal and MaeZe

Some informative science on that video.

And a lot about the pressure waves here and more science about the volcano:

Tocotin said:
We have tsunami warnings all over Japan right now.
Click to expand...

They keep going off but the main waves appear to have passed. Some parts of the coast did get a meter or more wave. See the other posts here.
Reactions: Tocotin

What about places like Tuvalu and Kiribati? Any news?

Power company is saying the Tonga subsea communication cable is down and may be broken, so they're trying to get satellite link connectivity.

Clean water looks like the greatest acute need since everything is contaminated with toxic volcanic ash.

Nothing in the news here yet re Tuvalu etc.

Tonga's still in a blackout: it's Too dark to see anything yet

Ardern said New Zealand was unable to send a surveillance flight over Tonga on Sunday because the ash cloud was 63,000 feet (19,000 meters) high but they hoped to try again on Monday, followed by supply planes and navy ships.
Click to expand... 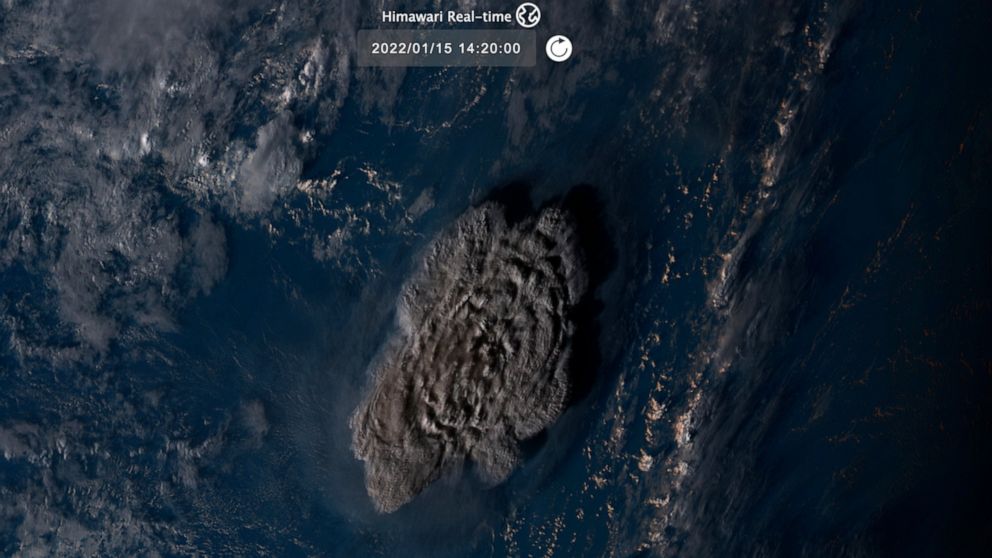 Unimportant said:
Power company is saying the Tonga subsea communication cable is down and may be broken, so they're trying to get satellite link connectivity.

Clean water looks like the greatest acute need since everything is contaminated with toxic volcanic ash.

Nothing in the news here yet re Tuvalu etc.
Click to expand...

Thanks so much for keeping us updated.

Brian Schmidt is a Nobel prize-winning scientist and vice chancellor of the Australian National University. Professor Richard Arculus is an emeritus professor in the Research School of Earth Sciences at the ANU College of Science.
Click to expand...

NZ has sent an Orion aircraft, and a Hercules is about to leave as well. No info from that yet.

Communications cable has definitely been broken:

Phone and internet communications to and from Tonga appear likely to be limited for weeks after confirmation that the fibre-optic subsea cable connecting Tonga to Fiji is believed to have been cut at sea. ...

Initially, it had been hoped the outage was only due to a loss of power to its Tongan landing station.
But Southern Cross Cable Network sales director Craige Sloots said Tonga Cable Limited – which owns the 872 kilometre cable – believed after testing on Sunday that the cable was broken and was now working with United States cable laying and repair company SubCom on the next steps.

SubCom’s nearest cable ship capable of effecting a repair appears to be Reliance, which is currently anchored off Port Moresby in Papua New Guinea.
Click to expand...

And here, a marina was munted and several boats damaged. Warnings galore about staying away from the shoreline. Which, of course, means Idiots Inc are out in full force:

People are ‘actively ignoring’ Mt Maunganui safety advice in the wake of the Tongan tsunami and Cyclone Cody, and have pulled down signs in a bid to check out unpredictable ocean swells, the council says.

Tauranga City Council has pulled in contractors to keep people away from Mauao and Moturiki/Leisure Island amid turbulent water activity, and asked people not to disregard safety advice, SunLive reported.

Both locations are expected to reopen later on Monday, but the council said some people had been actively ignoring safety advice, repeatedly pulling down warning signs at Mauao’s base track.

Both Mauao and Moturiki/Leisure Island were closed to the public on Sunday due to strong and unpredictable ocean surges.
Click to expand...

There's been another eruption, according to news. Hang on...

I'm not sure if that means there's just been another one, or that there were originally two.

And yes, looks like there may have been another one a couple hours ago: https://abcnews.go.com/US/tsunami-warning-issued-us-west-coast-alaska/story?id=82282242

EDIT: revised "has been" to "may have been", finding contradictory information.
Reactions: SWest

I saw a satellite image earlier today (which I can't find now) of the very high ash cloud drifting westwards across the Coral Sea to northern Queensland. Which, presumably, explains the extraordinary deep pink and purple dawn we had today.

It's a shame that beauty comes with so much destruction.

Helix said:
I saw a satellite image earlier today (which I can't find now) of the very high ash cloud drifting westwards across the Coral Sea to northern Queensland. Which, presumably, explains the extraordinary deep pink and purple dawn we had today.

It's a shame that beauty comes with so much destruction.
Click to expand...

When Mt St Helens erupted we lived on the east side of the mountain, 230 miles away. The sky got the oddest look with this dark bubbly cloud cover. Then the ash began to fall. It was horrid little teeny flecks of glass-like ash. I had to go inside to keep my eyes from getting painful ash in them.

We couldn't drive the car because it would have damaged the engine. Our friend that had been visiting did drive back to Seattle. He changed his oil twice on the way back to protect his engine.

But we didn't get the brunt of the ash. That fell around Spokane, about 250 miles away from the volcano. We got inches, they got more than a foot. It was so bad the road to Spokane was closed for a week. If you drove on that road the ash flew making visibility as bad as a blizzard.

After a week, cars were able to drive through in convoys with a police escort in the front and the back.

I have more stories....
Reactions: Brightdreamer and Helix

This link is interesting because they plotted the pressure changes from amateurs' backyard weather stations.

Astronomer Matt Penn and colleagues decided to investigate further. "We plotted the times of barometric pressure peaks from 150 backyard weather stations available on Weather Underground," he explains. This movie sequence shows the data they found:
Click to expand...

One reported death in Tonga so far as information remains scarce and communications remain extremely limited.

I have curly hair...

Location
Where the Moon can see me.

MaeZe said:
This link is interesting because they plotted the pressure changes from amateurs' backyard weather stations.

I really hate what our "civilization" does to the people who don't make most of the mess.

MaeZe said:
This link is interesting because they plotted the pressure changes from amateurs' backyard weather stations.

That's absolutely fascinating to watch. I checked my station history (NW Oklahoma) and didn't see any spikes. I'd love to see a list of the stations they used.
Reactions: MaeZe

Thank you, that was very helpful.
Reactions: MaeZe

Now three known deaths in Tonga and several injuries; catastrophic devastation on islands of Mango (where all houses were destroyed) and Fonoifua (all but two houses destroyed), and along the west coast of Tonga's main island Tongatapu (56 houses destroyed or severely damaged). Evacuations of stranded residents in various areas under way. Over 80% of the population of Tonga badly affected by the disaster, per the UN. Tonga in a state of emergency until February 13th.

Runway on Tongatapu has been cleared of ash and first relief supplies have arrived with further supplies on their way (though one aid flight has been disrupted by a positive corona-test); partial telephone connection with the rest of the world re-established but restoring full internet connectivity likely to take a month or longer. Power has been restored but remains fragile with frequent outages.

Water is currently among the main concerns, with large-scale pollution of drinking water by both volcanic ash and salt water. Thankfully, two New Zealand vessels carrying critical water supplies are not far out: HMNZS Wellington has arrived at Tonga and is surveying approaches for the HMNZS Aotearoa (bringing 250,000 liters of water + the capacity to desalinate an additional 70,000 liters daily) which is expected to arrive soon.

As catastrophic as the disaster has been, it's near-miraculous that so far, the death toll has been single-digit. Waves as high as 15 meters--not feet, meters--during the tsunami have been reported; eruption had an explosive force equivalent to ~10 megatons of TNT.

Peru has declared the oil spill that occurred as a result of the Tongan volcano eruption an environmental emergency (Source: Reuters) and is seeking compensation from Repsol, the oil gigant running the involved refinery. (Source: The Guardian)

Brits: careful of storm Eunice... yellow, amber and red weather warnings in place for different regions. Bristol channel has the red weather warning. Most of England and the rest of Wales has amber. Yellow warnings further north. Winds up to 100mph. Supposed to be the worst storm for 30 years. IIRC there's also a risk of floods in coastal areas.

My local council has advised the schools to close - both my kids' schools have closed for tomorrow. I'm working from home already (assuming there's still power and wifi) so don't have to leave the house either.