Now at 141 deaths/hundreds missing Germany; 27 deaths/103 missing or unable to be contacted Belgium. Still no deaths in the Netherlands, let's hope it holds.

Further evacs in the Netherlands as the water near Wells looks to be reaching higher levels than originally predicted and the dams and emergency measures are likely insufficient to fully protect against flooding. Parts of Haelen and Horn (Netherlands) evacuated a couple hours ago. Emergency sandbag dam at Horn breached. Multiple tiny leaks in various dams in the areas where the worst high water may have passed but waters will still be elevated for several days yet.

Some prime candidates for a Darwin award decided that this is the perfect moment to get into rubber boats and other small watercraft on the flooding Meuse.

Yeah, let's do that right while the river's at its highest levels in at least two centuries, moving at far higher speeds than usual, and is filled with sharp, heavy debris like trees and pieces of cars and such. By some miracle no resulting deaths.

On a happier note, emergency services managed to retrieve a cow from the Meuse. She was recovered at Escharen, about a hundred kilometers downstream from Echt where she ended up in the water. Miraculously enough, the cow is in good health.
Reactions: cmhbob, Introversion, MaeZe and 3 others

All those poor people (and unfortunate animals!), I hope it ends soon. I feel particular sympathy for the Dutch. The people of the Netherlands have famously spent so much time and effort keeping back the sea, and now water makes a sneak attack by rain and river!

Silenia said:
On a happier note, emergency services managed to retrieve a cow from the Meuse. She was recovered at Escharen, about a hundred kilometers downstream from Echt where she ended up in the water. Miraculously enough, the cow is in good health.
Click to expand...

100 kilometers! I want to say, holy cow! But I don't want anyone offended by the pun on such a serious subject.
Reactions: Silenia

frimble3 said:
All those poor people (and unfortunate animals!), I hope it ends soon. I feel particular sympathy for the Dutch. The people of the Netherlands have famously spent so much time and effort keeping back the sea, and now water makes a sneak attack by rain and river!
Click to expand...

Although less well-known, we have almost as much of a history of river flooding and efforts keeping the rivers back here in the Netherlands. It probably is the main reason why, although we're taking serious material damage, we've managed to avoid deaths so far.
Reactions: MaeZe

Eeow! May everyone surviving in flooded areas have whatever they need to survive.

And holding that same thought for everyone in fire country here in the Western US.

I am a thousand miles from the wildfires and the smoke from them has reached my city. The air is noticeably hazy and the sun, which is nowhere near setting yet, is already an angry orangey color.

(CNN)Hurricane Ida is expected to rapidly strengthen before pummeling Louisiana on Sunday, forcing evacuations in New Orleans and the surrounding coastal region on the eve of the 16th anniversary of Hurricane Katrina.
Click to expand...

Please leave NOW, or get everything in place for at least three days.
Reactions: neandermagnon, MaeZe and mccardey

Hunkered down in New Orleans. Lost power a few minutes ago. Surprised it stayed on as long as it did. Half the city has been down for hours already. It's windy and rainy, but we're far enough from the bullseye to avoid the worst of things. Settling in for a restless night.
Reactions: MaeZe and mrsmig

Thinking of you, Taz - stay safe.

Well, we made it through okay. People, critters, and house are all fine.

Unfortunately there was serious damage to some key points in the power grid, so the entire city is without power. Water plant has generators going, so that's good. I'm worried about the local hospitals. I'm sure they have backup power, but I wonder how long those systems can last.

Dunno about work either. My work absolutely requires a computer. With no electricity at my house or the office (and the internet was out too, before the power went) I'm not sure what I'll do. Typing on my phone isn't going to cut it. Oh well... that's a problem for daybreak. Just wanted to let folks know l'm alive and well.
Reactions: SWest, Chris P, MacAllister and 9 others

Thanks for coming in to tell us, Tazlima. Holding the good thought for your power system and all the folks in the wake of wherever Ida is going next.

The reports have been awful I'm glad you're safe.

Phew! I'm glad you made it through okay, Tazlima.

Thousands of people in the New South Wales central west have been warned to prepare to evacuate as the Lachlan River threatens to flood after heavy rain lashed the state.

More than 8,000 people in the town of Forbes are in the path of the river, which is rising upstream.
Click to expand...

Hope our Aussie members in NSW are all dry and safe, and thinking of all the NSW people in the path of the flood.
Reactions: mrsmig and mccardey

Hope our Aussie members in NSW are all dry and safe, and thinking of all the NSW people in the path of the flood.
Click to expand...

Same. NSW has been very wet. Very, very wet. (I've lost three trees and some fencing, but I'm outside the local storm zone and nearly 600ks away from the Lachlan River... ).
Last edited: Nov 15, 2021
Reactions: bleep, mrsmig, frimble3 and 3 others

At least 50 likely dead in Kentucky alone, governor says, after tornadoes hit central and southern US​

(CNN)Storms unleashed devastating tornadoes late Friday and early Saturday across parts of the central and southern US including Kentucky, where the governor says the death toll will exceed 50 after "one of the toughest nights in Kentucky history."
More than 30 tornadoes have been reported in at least six states. A stretch of more than 200 miles from Arkansas to Kentucky might have been hit by one violent, long-track twister, CNN meteorologists say.
Click to expand...

At least 70 people were killed in a devastating outbreak of tornadoes that ripped through Kentucky and several other US states late Friday and early Saturday, Kentucky Governor Andy Beshear said.

Beshear said the death toll could exceed 100.
Click to expand...

Check in when you can. Sending hope.
Reactions: Friendly Frog, SWest and AW Admin

mccardey said:
Check in when you can. Sending hope.
Click to expand...

I don't know how many Tongan members we have, but I hope you are safe.

The Hunga Tonga Hunga Ha'apai volcano north of Tonga in the South Pacific erupted yesterday evening, January 14th, close to sunset, in a spectacular explosion easily visible from satellites. Heck, the shock wave was easily visible from satellites. The sound of the explosion was audible thousands of miles away in Alaska. Atmospheric pressure waves were mapped sliding over Japan and North America. Large tsunamis hit Tonga and smaller ones hit countries all around the Pacific. Tonga's internet and communications grid went down entirely an hour or two after the explosion and a day later no one is sure what conditions on the islands are.

A massive underwater volcanic eruption off the island nation of Tonga is felt across the south-western Pacific, with many tsunami warnings still in place, including for much of Australia's east coast. 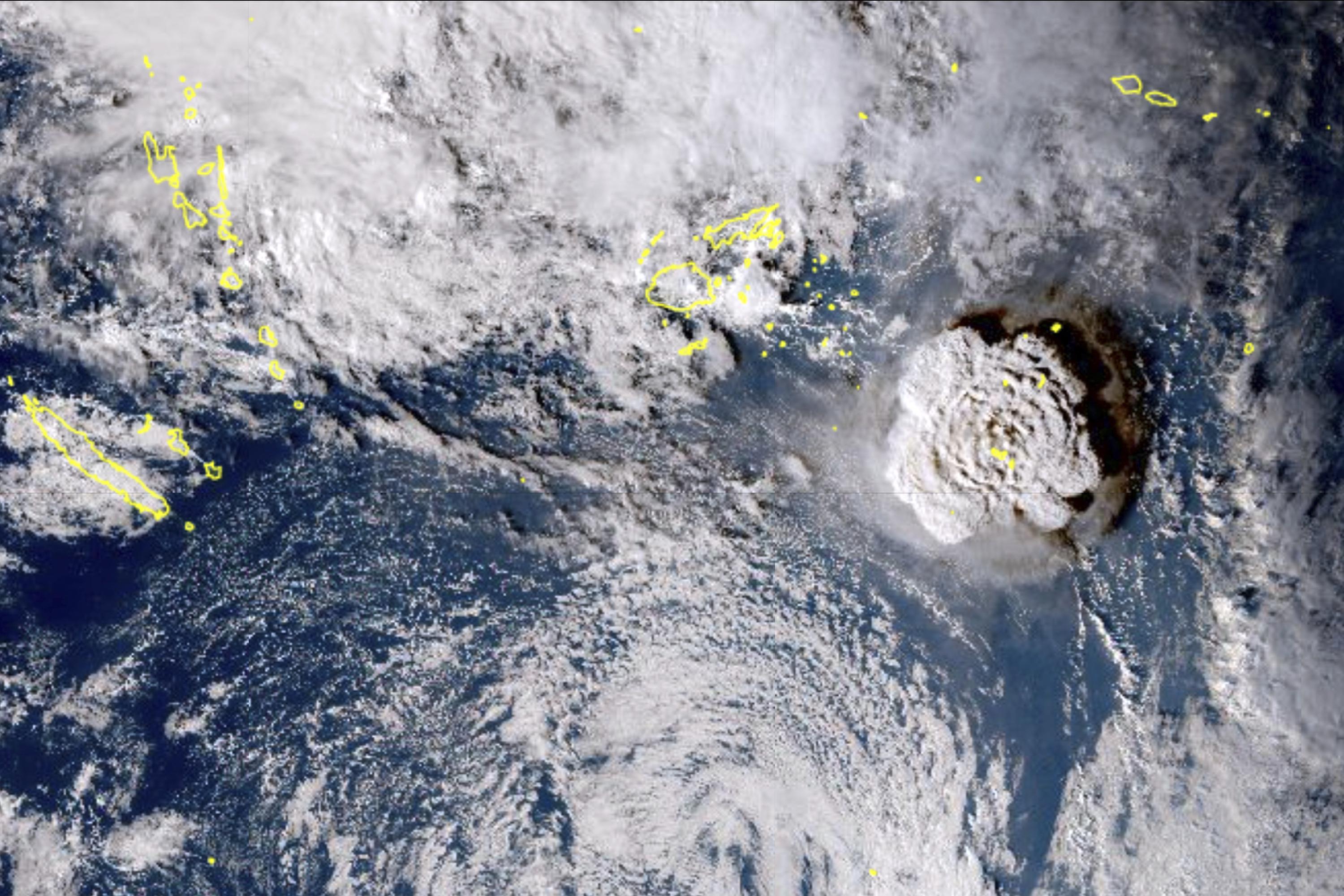 That video of the sound of the explosion reaching Fiji is def worth watching. It's in the ABC article linked to in Alessandra's post.

Here's an animation of the spread of the tsunami in the SW Pacific:

When I heard the Fiji sound recording my thoughts went to imagining that is what the Krakatoa eruption must have sounded like thousands of miles away.

There are some pretty cool gifs on this Twitter feed:


Anyone who got more than a meter of water had some serious damage to anything in the path.
Last edited: Jan 15, 2022
Reactions: mrsmig and Siri Kirpal

I hate to think of the death toll.

But all the photos and graphs and animations are impressive.