AW Books in The Wild

Kelly Meding's Three Days to Dead and As Lie The Dead. Both were fronted by the store, not yours truly.

And I spotted this one too:

Here's a shoutout to Jamie Ford's "Hotel on the Corner of Bitter and Sweet." I found my copy at the Owl's Nest Bookstore in Calgary, Alberta.

I don't have a pic, but i can take one, as it's now sitting on my nightstand. Does that count?

Hip-Hop-a-potamus said:
Here's a shoutout to Jamie Ford's "Hotel on the Corner of Bitter and Sweet." I found my copy at the Owl's Nest Bookstore in Calgary, Alberta.

I don't have a pic, but i can take one, as it's now sitting on my nightstand. Does that count?
Click to expand...

Well, Mac says it does, so nyahhh.

I just have to get the dig. camera back from my beloved spouse.

It totally counts. You've got the book in your hot little hands, show us a picture!

This is delightful news

I follow a few very good book-review blogs in Australia and today's review on one of them was for our very own aadams!!! Her debut novel got what can only be described as a five-star rave - and when I double-checked (thank you, Google) it turns out the book is getting this kind of treatment all over the place. Including Kirkus Review.


White Horse. by Alex Adams. Just in case you were wondering.

Location
Not where you last saw me.

You can't forget those you've loved

Saw two today at Bloomsbury Books, a smallish indie bookstore in Ashland, Oregon (we went for the Oregon Shakespeare Festival, a great time had by all). The bookstore was packed! I hope they are thriving.

They were both on shelves right by the front door, easy to see, face out. Hope I've got the photos right here - "The Night Circus" by Erin Morgenstern and "White Horse" by Alex Adams.

Location
Walking the fine line between cute and creepy...

Nice to know I'm not the only one who squee's at seeing a fellow AWer's book out "in the wild" - I swear, every time I go to the bookstore (if hubby is with me) I'll point out to him each and every book!

It's like "Hey! Look at this! I kinda/sorta know this person!" Feels like knowing a celebrity or something.

Someday... Someday I'll have myself a book out in the wild. Fingers crossed and all that.

Oh, and all of my spottings are of course in central Texas...

Location
On the nickel

The quest was long and arduous, some say I lost my mind in the process, others say it was already lost. Whatever the truth, I don't mind declaring that on more than one occasion I almost lost faith.

Perhaps it was my preponderance for perusing charity shops for books? After all, who but a madman freely discards a book written by an AWer's exalted hand? I don't know, but for those long, wilderness years, I spied nary a tome from an A dubbers paw.

Nor a single page.

And then today ... glorious today ... beautific today ... Thursday! (around lunchtime) I found one in a Tesco supermarket!

Unfortunately there is no in the wild pic -- a man without credit never carries his phone -- and yet here it is: rescued, taken to a warm place and given a stiff drink!

Now, just because I've re-homed the little blighter doesn't mean I'll treat her special. I don't have favourites -- Australians aside. So she'll go in the TBR pile just like all the rest and, after that, I have plans for her.

Yes, once she's read I'll re-release her -- ala Paddington Bear -- with a little tag on her jacket saying 'Please look after this book, thank you' ...

(and me. Because it was windy and cold and dark and it kept falling over.)


ETA: Waaah! It keeps being ginormous!
hang on....


ETA2: Nup - can't do it. If somebody clever or aged 14 could PM me about how to resize from Photobucket? In the meantime, you'll find it here

Yesterday, at Barnes and Noble in Clackamas, Oregon - the beautiful book in the middle - by Jamie Mason (AWer Perks)

I'll be going to my local B & N, and will order copies if they aren't on the shelf.


I found it yesterday at Chapters in Sherwood Park, Alberta.

It's not there anymore.

I'm very excited. My friend Tracey posted this, of my book, to Facebook while she's sitting on a beach in the Dominican Republic!

My latest, Nun Too Soon, on the New Mystery shelf in the Amherst, NY B&N this past Saturday.

I saw two of Mr Flibble's books in Waterstones in Southampton in the UK, today. 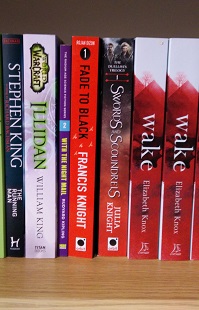 Saw this by John E Robison at a Barnes & Noble in Greenville, South Carolina, while on vacation last week. From AWer johnrobison.